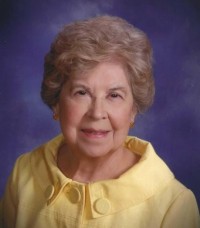 Amanda MacDonald Leech of Kittanning, PA, passed away Monday, May 16, 2022, at ACMH Hospital.

She was born in Creighton, PA, the daughter of Frederic Earl and Margaret Lee McGuen MacDonald.

Amanda was a member of the First United Methodist Church of Kittanning. She received her Bachelor of Science Degree in Education from Indiana University and taught at the Intermediate Units of Armstrong and Indiana Counties. In 1976, she received the Pennsylvania Teacher of the Year award for her professional and personal concern for children with intellectual disabilities. She was a member of the Alpha Delta Kappa, an International Honorary Sorority for women educators. Amanda was a former President of the Kittanning and Ford City Jr. Woman's Club and was also the First Chairman of the Board of Directors of the Mental Health Clinic of Armstrong County, which is now the Family Counseling Center. Her greatest joy came from spending time with her family and being a beloved grandmother to her grandchildren.