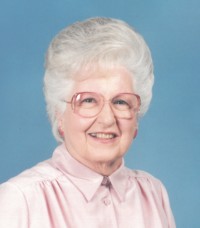 She was born December 4, 1923 in South Bend Twp., Armstrong Co., PA, the daughter of Walter C. and Ethel (Stubrick) Rupert.

Eleanor believed it was important to give back to her community and served with many local organizations. She took a Red Cross home nursing course during WW2 and later cared for many family members and friends. Eleanor also served as a 4-H leader for 17 years and won many awards for her sewing, quilting, and crafts. Hundreds of children and adults have received her handiworks donated to various charities.

Eleanor was grateful to have traveled extensively to all fifty states, Canada, South America, Europe, and Russia. Some of her favorite trips included landing in a small plane on a floating ice strip above the Arctic Circle, cruising along the ocean floor in a submarine in the Caribbean, viewing the Grand Teton Mountains while floating down the Snake River on a raft, and watching the Eisenhower inaugural parade from a window in a senate office building.

Eleanor was preceded in death by her parents; loving husband, Todd R. Christy, whom she married August 7, 1945 and who died January 12, 1970; and brothers, Glenn, Leroy, and Nevin Rupert.

The family would like to thank the staff at Maple Valley, as well as Melanie Williams, Mary Ellen Cessna, Dana and Michael Scott who supported her with dignity.

Services will be private.

A memorial service will be announced at a later date.

Interment will be in Mt. Union Lutheran Cemetery, Shelocta, PA.